Osian is an ancient town located in the middle of the Thar Desert. Often known as the "Khajuraho of Rajasthan", Ossian is famous as the home to a cluster of ruined Brahmanical and Jain temples dating from the 8th to 11th centuries. One can enjoy the view of 18 shrines, out of which Surya or Sun Temple, the later Kali temple, Sachiya Mata Temple and the main Jain temple dedicated to Mahavira stand for their grace and architecture. The temple was known for chamatkars and therefore everybody prayed to Chamunda Mata. During navratri, buffaloes were butchered and people gave offerings of flash of buffaloes to please Chamunda Mata. Acharya Shri Ratna Prabh Suri stopped this practice of animal killing. Because of this the goddess got angry and she created pain in the eyes of the Acharya. He did not do anything but continued with the suffering. Chamunda Mata was ashamed when she found that Acharya has not reacted to her act. She asked for forgiveness from the Acharya. Acharya told her to not allow killing of animals as offering to her. He said that she is doing her own harm by asking her devotees to offer flash of buffaloes or other animals. She will have to face all the wrong done in her name. She was made goddess because of her good actions but now she will have to face the hell. The goddess got enlightened. She told Acharya that from today no such killings would be allowed in the temple. Even red colored flower should not be offered. She would accept Prasad and Lapsi. Her worship will be done by kesar, chandan (sandal wood) and dhup (incense sticks). She will be happy as long as people are devoted to Lord Mahavira. She would fulfill all prayer of her devotees. 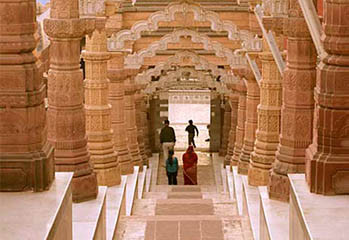 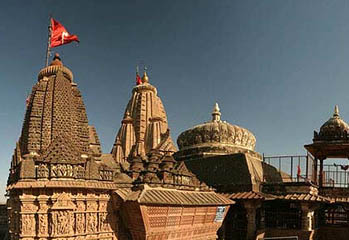 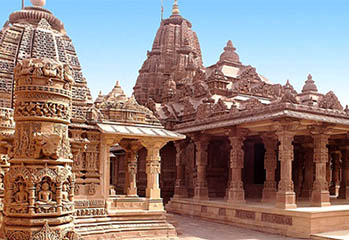